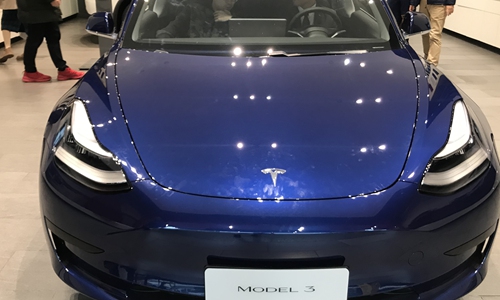 A Tesla Model 3 on display in Shanghai on Sunday Photo: Xie Jun/GT

China’s vehicle industry has been clobbered by the novel coronavirus pneumonia (COVID-19), with sales of automobiles estimated to decline by at least 1 million in 2020, an analyst said on Thursday.

The short-term impact of the epidemic on China’s economy will be bigger than it was during SARS in 2003, with more serious implications for the auto industry, which is undergoing an adjustment, the China Association of Automobile Manufacturers (CAAM) said during an online press briefing on Thursday.

Demand has tumbled, production has been hindered and some medium-sized automakers even face a capital crunch, the association said.

Automobile output in Central China’s Hubei Province usually accounts for about 8-9 percent of the country’s total, while South China’s Guangdong and East China’s Zhejiang provinces are also important manufacturing centers. As these provinces are affected, local automobile assembly and the supply of car parts across the country is now being disrupted, the association said.

Xu Haidong, assistant secretary-general of the CAAM, said at the conference that auto sales are expected to slump in the first quarter amid the COVID-19 outbreak.

Sales in China dropped 18 percent year-on-year in January to 1.94 million units. Sales of new-energy vehicles tumbled 54.4 percent to only 44,000, data from the CAAM showed.

The short-term impact on the auto industry is sharp, as the epidemic broke out during the Lunar New Year holidays, a traditional boom season for car sales, Cui Dongshu, secretary general of the China Passenger Car Association, told the Global Times.

“The domestic auto market is expected to see a short-term consumption jump after the end of the epidemic, but we should not be optimistic about the sector for the whole year,” Xu said.

Cui said that the epidemic is likely to result in a sales reduction of about 1 million units in 2020.

“Overall, automobile part exporters along the Yangtze River will mostly bear the brunt, as foreign automobile companies may resort to suppliers in other countries,” Cui said.

Automakers are striving to restart production, according to the association. A total of 59 automobile production bases in China had resumed production by Wednesday, accounting for 32.2 percent of the total polled by the CAAM.

By contrast, the business reopening rate among 3,997 4S dealerships across the country was only 8.4 percent as of 5 pm Wednesday (Beijing time), data from the China Automobile Dealers Association showed.