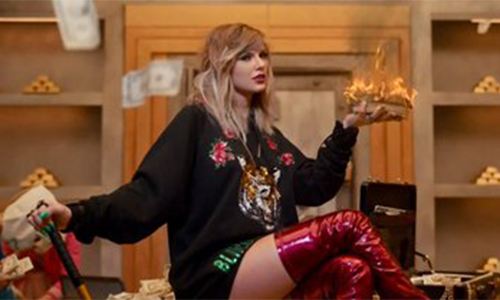 A scenes from Taylor Swift’s video “Look What You Made Me Do” Photo: IC

The documentary Taylor Swift: Miss Americana has won the hearts of Chinese fans, many of whom took to social media to share their feelings about their idol.

The documentary released on Netflix on January 31 focuses on US singer-songwriter Taylor Swift, showing some turning points in her career and life including her struggles with an eating disorder, self-esteem, voicing her political views and sexual assault. It currently has a high score of 8.7/10 on China’s leading film review website Douban.

“The documentary made me like her more. She is a real musical talent. Although she has suffered some controversies, her quality music proves her ability when it comes to the music field. I like the new song ‘Only The Young’ she wrote in the film,” Zhang Chen, a Chinese fan living in Southwest China’s Yunnan Province, told the Global Times on Tuesday.

“After watching the documentary, I think she is an ordinary person who suffers from unfair treatment and attacks from the media, but she is strong to go through this suffering with the support of her family, her team and fans like me,” Du Judy, another Chinese fan and an education entrepreneur based in Beijing, told the Global Times on Tuesday.

Du also added that the documentary also revealed Swift’s opinion on women’s rights and politics through many detailed stories that allowed her to get to know her idol better.

However, those who are not Swift fans are wondering if the star is using the film as an opportunity to wipe clean her black history and build a perfect image of being a legendary star.

“The director failed to show the real person under the star mask, but another layer of well-designed personality. The whole film shows a lot of vulnerable moments, which tend to make everyone more sympathetic to her. For example, she said she is 29 years old and does not know how long society will be ‘tolerant’ her, which is full of vanity. She seems to beg society to give her more time in the limelight,” one Chinese netizen commented on China’s Twitter-like Sina Weibo.


Warning: Invalid argument supplied for foreach() in /home/customer/www/rubiconglobaltrade.com/public_html/wp-content/plugins/activecampaign-subscription-forms/activecampaign.php on line 103