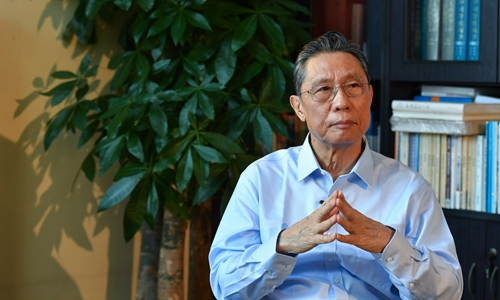 Guangdong’s ICU medical team who is supporting  in the fight against the novel coronavirus pneumonia epidemic in Wuhan held a video consultation with their backup team, the First Affiliated Hospital of Guangzhou Medical University on Tuesday.

In response to a question by the Global Times on the turning point of the current novel coronavirus pneumonia epidemic, Zhong, who participated in the consultation, said that no one can predict the turning point now.

Zhong, who gained fame for exposing the scale of the SARS outbreak, said the virus infection is likely to peak in mid- or late-February based on current data, research and control measures.

There is a mathematics model, which is continuously being rectified according to the real situation, and  climate factors are being considered. The strict implementation of “early detection, early treatment” also helps to control the epidemic, Zhong noted.

Currently the new confirmed cases show a decreasing trend, and the mathematics model predicted that the turning point will arrive in mid- or late-February in southern China, said Zhong.

New confirmed cases of the novel coronavirus pneumonia have seen their seventh consecutive day of decline in the Chinese mainland outside Central China’s Hubei Province as of Tuesday, data from China’s top health authority shows.

According to data from the National Health Commission, a total of 381 people were added to new confirmed cases of the novel coronavirus pneumonia infection outside Hubei as of the end of Monday. The numbers in previous days were 890, 731, 707, 696, 558, 509, and 444.

Amid concerns that resuming work may cause a wide spread of the epidemic outside heavily-hit regions, Zhong said such possibility is low as most virus carriers should have shown symptoms after the weeks-long holidays and the transport systems have a checking mechanism to detect abnormal.

As for the outbreak epicenter Wuhan, Zhong stressed that the two most crucial tasks for the city are quarantining all people suspected of infection, which should have been done earlier; and increasing the treatment capabilities to rescue patients in a critical condition.