Govt must continue efforts against NCP 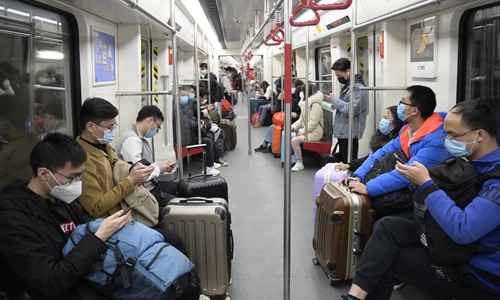 The number of confirmed cases of novel coronavirus infection outside of Central China’s Hubei Province, the epicenter of the outbreak, has been declining for seven consecutive days. But no government official dares to claim the inflection point of novel coronavirus pneumonia (NCP) has appeared. No one is even willing to say that the spread of the epidemic has been under control.

It is quite sensitive to predict when the inflection point will occur. Some officials’ previous statement that the epidemic could be prevented and controlled as well as their lax approach to prevention provided extremely painful lessons. Government officials are now very cautious. They would rather describe the epidemic as a more severe situation and to implement maximum prevention measures.

However, people returning to work after the long Spring Festival holidays cannot be stopped. As the situation of epidemic prevention and control in major cities, such as Beijing and Shanghai, gradually stabilizes, people’s fear will increasingly be replaced with their consumption desires.

People will gradually believe that China’s prevention and control system is already powerful, with which the new infected patients can be quickly located and quarantined, and the risk of being infected will become increasingly smaller.

A new situation will emerge: The officials will remain tense and continue to take various steps to prevent the epidemic from spreading further, while the general public will rely more on the government’s prevention system and less on self-protection.

The emergence of a few new infection cases is inevitable. But authorities must be capable of taking quick measures, including finding them out and isolating them.

When the number of new confirmed cases of the novel coronavirus infection can be maintained at around 10 every day in a metropolis like Beijing, it would mean that the probability of people being infected each day is less than 1 in a million. The probability is very low and people would have good reasons to be no longer afraid of it.

But we are in a situation where the whole society is a state of extreme nervousness. Panic has also become a tool to curb the spread of the virus. Such a situation should never last long. It can only serve as a temporary measure to build a society-wide prevention and control system. After the system is established, individuals should gradually relax their vigilance and not let panic affect their daily lives.

Counting on ordinary people’s fear of going outside to control the epidemic was a measure in the early stage forced by circumstances when the public prevention and control system was not in place. But if ordinary people still dare not go anywhere in the future, the establishment of the system will lose most of its meaning.

After the situation stabilizes, the local governments of various cities should see which one can control the epidemic while achieving economic and social development. And the quality of citizens can also be reflected in their ability to fully cooperate with the government’s prevention and control measures. Individuals should protect themselves without panic and jointly promote their cities’ healthy operations.

It was the city authorities’ neglect of duty when they were slow to take measures in the face of the epidemic outbreak. But it is still wrong to ask people not to go outdoors after the most urgent and severe situation is placed under control. Our cities must be fortresses to shield us from the NCP and any other pandemic, but they are also arenas of various economic and social activities. As people gradually return to their normal lives, the prevention and control measures must not be neglected.