Deep in rural western Zimbabwe, where tarred roads are nonexistent, Japhet Ngwenya used to spend every season worrying that the people who advise him on how to protect his crops from dry spells and pest invasions would not be able to reach him. 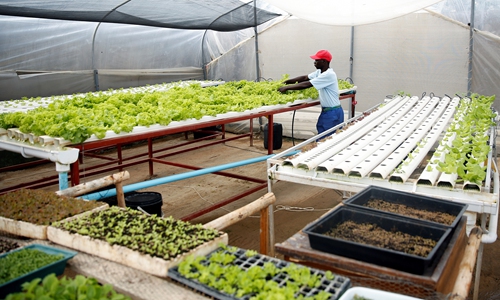 A worker tends to plants growing in a hydroponic garden in Harare, Zimbabwe on January 15. Photo: VCG

Ngwenya’s farm – in Ntabazinduna, 40 kilometers north of Bulawayo – is so remote that he can go a year or more without seeing the agriculture extension officers who are sent by local charities to assist small-scale farmers like him.

“It has always been difficult to get expert advice. There are no proper access roads here and you drive this far at your car’s peril,” he told Reuters as he readied his fields for a crop of maize, tomatoes and cabbages.

Then, last year, two extension officers from the consortium Turning Matabeleland Green (TMG) managed to make their way to Ngwenya’s farm to show him their solution: climate and crop information collected by satellite and sent to farmers’ phones.

Zimbabwe has been slow to embrace satellite-based systems for its agricultural sector, but now the country is seeing the benefits of using the technology to help farmers adapt to the impact of climate change, agricultural experts say.

More than 7 million people work as communal or small-scale farmers, according to the UN Food and Agriculture Organization (FAO).

Many still rely on traditional weather-predicting systems and occasional visits by on-the-ground extension officers to get crucial information and advice.

But using satellite data, groups like TMG can access weather information that is more accurate than the general forecasts supplied by the meteorological department, said Lwazi Mlilo, an agronomist working with TMG.

And with mobile phone technology, they can get that information to farmers faster than they would by sending people out to hard-to-reach farms, he added.

Mlilo showed Ngwenya how extension officers can look at the farmer’s 27-hectare holding on Google Maps and combine that with satellite data available online to track everything from weather patterns to the health of crops.

“I can monitor the activity on your farm from my office. We do not need to come here to check the progress of your crops,” he explained to the visibly awed farmer.

Experts might then advise farmers in the low-rainfall Matabeleland region on what seeds to plant and which techniques to use to keep their crops thriving, Mlilo said.

Because most rural farmers in Zimbabwe have no internet connection – many have no electricity at all – TMG communicates with them via SMS, he told Reuters.

The organization can quickly tell farmers if a plot in their area has suffered a pest invasion or send out warnings about sudden changes in climate conditions to all the farmers in a particular area at once, he explained.

“Farming is not as tough as some imagine – as long as one has access to relevant, up-to-date knowledge, especially now with new technologies,” Mlilo said. He said about 2,000 small-scale farmers have joined the project since it was launched last year.

Last year, the FAO said satellite data had the potential to help Africa’s farmers “be better prepared for drought and increase agricultural production with less water use.”

Much of the satellite-based information that TMG uses to craft advice it sends to small-scale farmers comes from a new database launched in Zimbabwe in September 2019.

It was built as a collaboration between the Chinese Academy of Sciences and the University of Zimbabwe, with information collected by high-resolution satellites.

It provides highly detailed information that enables experts to follow the effects of climate change across the country, backers said.

A year earlier, the government launched the Zimbabwe National Geospatial and Space Agency (ZINGSA), made up of five departments focused on encouraging the country’s economic and social development.

Both projects use satellite technology for crop surveillance, drought monitoring, tracking soil conditions and documenting the most effective use of water, among other things.

All of that information can be relayed to farmers to help them use their resources most efficiently and safeguard their crops against drought, said Elisha Moyo, principal climate researcher at Zimbabwe’s agriculture and climate ministry.

“The use of satellite technology is encouraged as an early warning strategy,” he told Reuters.

The goal is to improve farming yields and shore up food security in a country where, during times of peak production, up to 80 percent of staple maize is grown by small-scale farmers, according to government figures.

“I definitely believe technological interventions will have a great impact on food production and food security as a whole for our nation,” he told Reuters.

‘What we really need is rain’

As droughts grow longer and harsher in southern Africa, Zimbabwe is looking for ways to support its embattled farmers.

In the latest budget presented in November, the government announced it was setting aside 340 million Zimbabwe dollars ($900,000) towards agricultural extension and advisory services, a significant hike from the previous budget.

At the time, finance minister Mthuli Ncube said the funding would go toward spreading the use of new technologies – including precision-farming tools such as satellite and GPS – to track land use and water availability.

For many of Zimbabwe’s long-struggling farmers, the move to satellite data and other modern technology offers hope that they might break the cycle of poor harvests.

Ngwenya, the farmer in Ntabazinduna, said he is willing to try anything that might help.

“What we really need is rain,” he said. “But we will certainly appreciate anything that will bring us relief.”