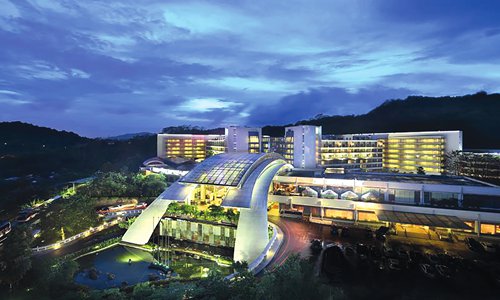 As epidemic control and prevention efforts are ongoing, the hotel closure rate nationwide is more than 80 percent. The occupancy rates of most open hotels are just over 10 percent, an industry insider said.

As the impact of the outbreak has intensified, more than a dozen overseas airlines have suspended some Chinese routes or reduced their flight schedules. Tourists have also canceled travel plans during and after the Chinese New Year holidays, making it difficult for international hotel groups in China to maintain daily business operations.

David Ding, general manager of Crowne Plaza Beijing Sun Palace under the InterContinental Hotels Group, told the Global Times that the occupancy rate is about 7 percent, which is typical for international hotels at present.

“We’re not going to lay people off, but we’re going to have to reduce costs like inventory and energy,” Ding said. “Now the Beijing government doesn’t allow more than three people to eat together, so we shut down the hotel restaurant.”

Ding said that the hotel will pay February salaries in full, and then it will arrange staff according to the hotel’s needs.

In addition to InterContinental Hotels Group, other hotel groups’ business in China has also experienced a hard time amid the outbreak.

Hilton operates 6,100 hotels worldwide, with 225 in greater China including four in Wuhan, Central China’s Hubei Province. About 150 hotels in the greater China region are currently not accepting new guests, though existing guests will not be affected, according to a statement the Hilton Group sent to the Global Times on Thursday.

The statement said that it is still too early to count the hotels’ losses, as it is now a crucial time for outbreak control.

Hilton’s revenue per available room is decelerating, from a rise of 0.8 percent for the full year to a drop of 1 percent for the fiscal fourth quarter, according to the company’s statistics.

A customer service representative at a Hilton hotel in China said most of the hotel’s restaurants have been closed due to lack of customers, and now only the executive floor provides catering.

A source close to the Hilton Group told the Global Times that the occupancy rate in Hilton hotels in Beijing is currently in the single digits.

“We have no plans to cut jobs yet, but that depends on how long it will take [for the epidemic to be controlled],” he said.

Yang Honghao, director of the Industry Research Institute of the China Tourism Academy, told the Global Times on Thursday that the international hotel industry in China should reached its lowest point.

If the epidemic can be tamed in April, domestic travel will recover in two to three months, but international travel will take longer, particularly MICE (meetings, incentives, conferencing, exhibitions).

“If the outbreak is contained in April, and after a brief period of relief in May, much of the country could see a rapid rebound in June,” Yang said, adding that recovery in the hardest-hit province of Hubei may be delayed.

Li Bowen, an expert in the hotel industry and professor at the Tourism College of Beijing Union University, told the Global Times that given the importance of the Chinese market, foreign hotels cannot give up the Chinese market.

“Effects of the outbreak are short-term and will recover quickly after this cycle,” Li said.
Newspaper headline: Hotels see 80% closure rate, 10% occupancy amid COVID-19 onslaught