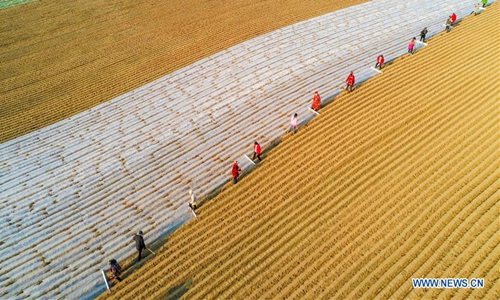 The novel coronavirus pneumonia (COVID-19) outbreak may impede the coming spring ploughing and sowing in the southern part of China, as the epicenter of the epidemic — Central China’s Hubei Province — provides about 30 percent of the phosphate fertilizers and compound fertilizers used by the nation’s agriculture sector, the largest share among all the provinces.

“We won’t be able to dispatch even one ton of fertilizer outside Hubei in February because of the virus onslaught,” he said, expressing hope the deadly disease will be controlled by the end of the month because March is the sales peak for the company.

Part of the orders were made at the end of last year, but the Wuhan-based company cannot send products to the customers because the city has been under lockdown since January 23.

“The factory has suspended production without any hint of permission to restart, and all of our sales colleagues are quarantined at home,” he said, noting he has to keep in touch with customers through phone calls and messages on WeChat instead of meeting them in person as in previous years.

In addition to Hubei, agricultural fertilizers and seeds may not arrive in time due to factory production delays and logistics blocks across the nation, agricultural material companies and farmers told the Global Times.

The manager of a small seed company in Mianyang, Sichuan Province, told the Global Times due to the road blockage in the local village, he has not started to sell his crop seeds, which would have been done at this point last year.

To deal with such issues, the Ministry of Agriculture and Rural Affairs on Monday introduced a document, asking local agricultural departments to resolve traffic blockages to send seeds, fertilizers and pesticides to farmers in time to catch up with the spring ploughing and seeding.

In addition, the document encouraged farmers and workers to return to work at nearby farms, a move to ease labor shortages and costs.

Li Guoxiang, a research fellow at the Rural Development Institute of the Chinese Academy of Social Sciences, suggested that logistics for agricultural materials should be included in the system of epidemic response.

“For private retailers, they don’t have strong logistics systems to support product transportation. Special licenses should be given to them,” Li told the Global Times.

He added that a labor shortage is not a major issue for China’s agricultural sector, because the country’s level of mechanization is pretty high.

The ploughing season comes relatively late to northern China, so farmers in the major agricultural provinces of Shandong, Northeast China’s Heilongjiang Province and North China’s Hebei Province have not felt much impact from the disease.

Li Shiguang, an official from the agricultural sector in Xinglong county in Hebei, told the Global Times that local farmers start spring sowing in April and the supplies of seeds and pesticides are unlikely to be affected, under the control of the local government.

A farmer named Zhu Yuebin in Heilongjiang, which is renowned as China’s soybean base, said trucks carrying seeds and fertilizers can go to local warehouses after inspection and disinfection.

Although he decided to increase the area planted with soybeans this year under the country’s soybean revitalization plan, he said in the longer term, the demand for soybean meal and corn will be affected by the epidemic because many poultry farms are suffering from a lack of fodder.

Wang Sheng contributed to the story